Biosimilars Set To Reduce Biologic Spending By Over $40bn Through 2026

The oncoming rush of biosimilars into the US pharmaceutical market is expected to exceed the impact of small molecule generic drugs for the first time, according to IQVIA research.

Source: Shutterstock Loss of exclusivity is set to equal loss of profit for branded drug manufacturers.

Biosimilar introductions and uptake are set to exceed the impact of small molecule generics in the US for the first time, reducing biologic spending by more than $40bn through to 2026, according to the IQVIA Institute for Human Data Science US Medicines Trends 2022 Report.

For the five-year period between 2017 to 2021, the compound annual growth rate for US medicines spending was 4.6%, while for the prior five-year period it was 4.3%. However, over the next five years IQVIA expects medicine spending growth to slow to between 2% to 5% on a list price basis and 1% to 4% after discounts and rebates, thanks partially to increased usage of cheaper biosimilar medications.

Beyond COVID-19 Spending Growth, Biosimilars Slowed Growth In Other Categories

“Spending growth will be offset by losses of exclusivity and continued emergence and uptake of biosimilars, and a shift in COVID-19 spending to reflect a shift to endemic status,” the report stated.

The report found that spending on medicines in the US reached $407bn in 2021, a 12% rise compared to 2020, with COVID-19 vaccines and therapeutics accounting for $29bn of the figure. Outside of COVID-19 products the market grew 5%, experiencing a significant increase in the growth of biosimilars which offset the use of branded drugs.

Most of the LOE impact over 2021 came from competition from biosimilars introduced to the market over the past three years, particularly from rivals to cancer drugs Avastin (bevacizumab), Rituxan (rituximab) and Herceptin (trastuzumab). Biologic brand losses reached $10bn in both 2021 and 2020, a substantial increase from $5bn in 2019 and totaling $31bn over the last five years.

Biologics are now expected to experience $40bn of brand losses over the next five years, with the largest impact expected to come next year when Humira (adalimumab) loses its exclusivity in the US and faces competition for the first time. (Also see "Humira One Year Out: The Largest LOE Event In US Pharma History" - Generics Bulletin, 31 Jan, 2022.) Competition facing products such as Lucentis (ranibizumab) and Stelara (ustekinumab) is also expected to play a part. (Also see "The Next Big Patent Cliff Is Coming, And Time Is Running Out To Pad The Fall" - Scrip, 4 Apr, 2022.)

Conversely, small molecule brand losses were much less in 2021, at only $6bn compared to $13bn the previous year, as fewer products with higher spending lost exclusivity and deflationary effects of earlier expiries were not as strong. Small molecules contributed $62bn in brand losses to the LOE figure over the past five years, down from $84bn in the prior five years.

Going forward, the impact of small molecule LOEs is expected to be less than a quarter of the level seen over the last five years, according to the report. This is because small molecule impacts are fewer, rebates are higher and the past five years “embedded a significant effort by the US Food and Drug Administration to approve more generics from older expiries, which contributed significantly to the impact.”

Despite its toll on overall pharmaceutical industry growth, the impact of patent expiries as measured at net prices is ultimately set to decrease to $56bn from 2022 to 2026, compared to a total of $93bn for the previous five years.

“These estimates embed significant uncertainty,” IQVIA noted, “as the number of competitors in each molecule, their decisions as well as the competitive actions of originators and the cost negotiating tactics of insurers and drug purchasers, could all impact market dynamics.”

“In some cases, negotiations may even spill over into other still-patent-protected brands in the same therapy areas, resulting in higher discounts, rebates and use of coupons, driving up competitive intensity.”

Generics Fall In Cost For Insured Patients But Rise For Uninsured

IQVIA’s report also noted that generic prices have deflated over the last five years, “driven by an increase in the number of generic approvals, shrinking a previous backlog in applications at FDA and bringing new competition to existing generic molecule markets as well as the impact from new patent expiries during the period.”

In a section of the report examining patient out-of-pocket costs, IQVIA found that for generics, commercial and Medicare patients have seen their costs decline while cash-paying patients saw costs rise from $29.33 in 2016 to $43.27 in 2018 and then drop to $37.84 in 2021.

Uninsured patients paying with cash will have seen costs rise for all types of products, from $38.63 in 2016 to $43.62, driven by a rise in generic prices in 2018 before the deflation, alongside a slight drop in brand prices. 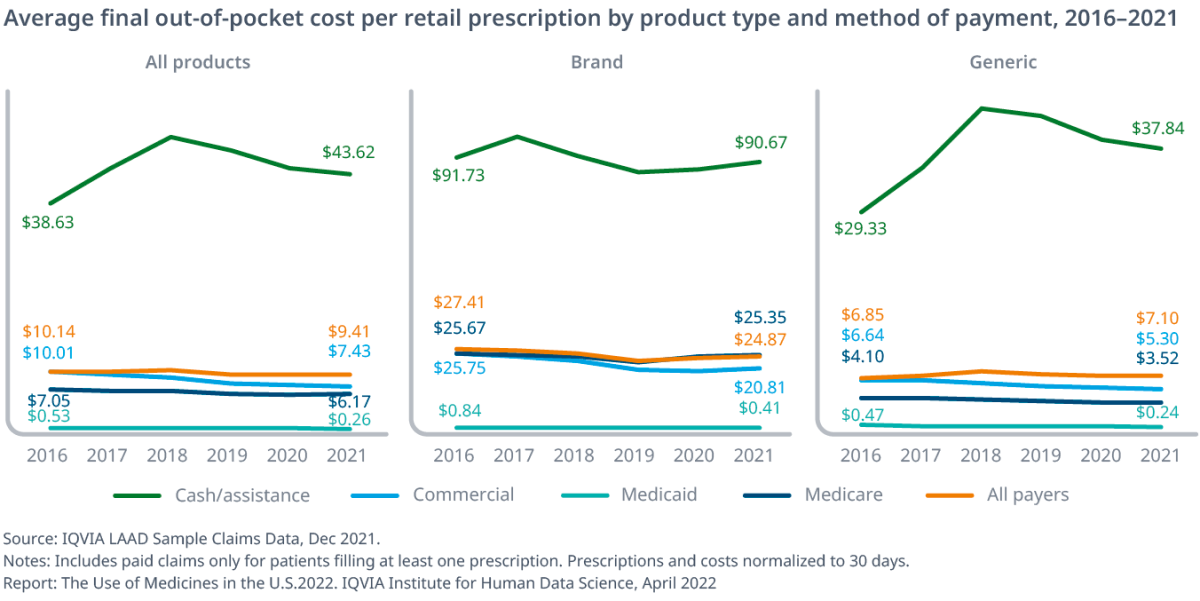 The overall generic share of adjusted prescriptions has now reached 92%, including branded generics, due to patent expiries for products used by millions of patients. Over 92% of branded and generic prescriptions have a final out-of-pocket cost below $20, and only 0.9% have a cost above $125. Generics and branded generics account for 16% of invoice-level spending but represent 65% of patient out-of-pocket costs, the report found.

The Next Big Patent Cliff Is Coming, And Time Is Running Out To Pad The Fall